Discrete Piezoelectric Stacks with Through Hole, 7.0 µm to 40.0 µm Travel

Front View of the PK4FA2H3P2

Piezo Chips with Through Hole

Round Piezo Chips and Stacks

Thorlabs' Discrete Piezoelectric Stacks consist of multiple piezoelectric chips, each with a central through hole, stacked face-to-face and bonded via epoxy and glass beads. By combining many chips, a stack is able to achieve a free stroke displacement that is significantly larger than that of its single chip counterpart while maintaining sub-millisecond response times and a low drive voltage range. The central through hole makes these piezos ideal for laser tuning and micro-dispensing applications.

Flat ceramic plates with matching through holes cap the two mounting surfaces on opposite ends of the piezoelectric stack. The ceramic plates assist in both distributing the applied force of the load over the mounting surface of the stack and in directing the force along the actuator's axis of translation. When interfacing the flat surface of a load with this flat mounting surface, ensure the two surfaces are highly flat and smooth and that there is good parallelism between the two when they are mated. For more details see the Operation tab.

A ceramic layer covering the other four sides and central hole of the stack acts as a barrier against moisture. The ceramic layer offers better protection against moisture than an epoxy coating. For convenience, the stacks have pre-attached 75 mm long wires and are wrapped in polyimide tape. Piezo chips with custom dimensions, voltage ranges, and coatings are available. Please contact Tech Support for more information. 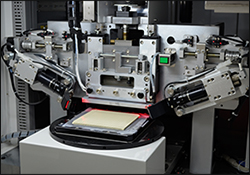 Click to Enlarge
Dicing the PZT Block into Individual Elements

Click to Enlarge
Chips After Binder Burnout and Sintering

Power Connections
A positive bias should be applied across the device using the wires connected to the electrodes. The positive wire should receive positive bias, and the other wire should be connected to ground. Applying a negative bias across the device may cause mechanical failure. The positive wire may be identified in two ways: it is red, as can be seen in the product images, and it is attached to electrodes on the side of the stack indicated by the line of + marks, as is depicted in the image at right. (On some devices, the line of + marks is replaced with a line of dots.) The wire that should be grounded is black, and it is attached to the electrodes on the side of the stack opposite the side with the positive electrodes.

Caution: after driving, the piezo is fully charged. Directly connecting the positive and negative electrodes has the risk of electricity discharging, spark, and even failure. We recommend using a resistor (>1 kΩ) between the wires to release the charge.

Soldering Wire Leads to the Electrodes
If wire leads must be reattached to the electrodes, a soldering temperature no higher than 370 °C (700 °F) should be used, and heat should be applied to each electrode for a maximum of 2 seconds. Solder the lead to the middle of the electrode and keep the region over which heat is applied as small as possible.

Interfacing a Piezoelectric Stack with a Load
Piezoceramics are brittle and have low tensile strength. Avoid loading conditions that subject the actuator to lateral, transverse, or bending forces. When applied incorrectly, an external load that may appear to be compressive can, through bending moments, cause high tensile stresses within the piezoelectric device. Improperly mounting a load to the piezoelectric actuator can easily result in internal stresses that will damage the actuator. To avoid this, the piezoelectric actuator should be interfaced with an external load such that the induced force is directed along the actuator's axis of displacement. The load should be centered on and applied uniformly over as much of the actuator's mounting surface as possible. When interfacing the flat surface of a load with an actuator capped with a flat mounting surface, ensure the two surfaces are highly flat and smooth and that there is good parallelism between the two when they are mated. To attach a load to the piezo stack, we recommend using an epoxy that cures at a temperature lower than 80 °C (176 °F), such as our 353NDPK or TS10 epoxies or Loctite® Hysol® 9340. Loads should be mounted only to the faces of the piezoelectric stack that translate. Mounting a load to a non-translating face may lead to the mechanical failure of the actuator.

, below. The temperature of the device should not be allowed to exceed its specified maximum operating temperature.

Quick changes in the applied voltage result in fast dimensional changes to the piezoelectric stack. The magnitude of the applied voltage determines the nominal extension of the stack. Assuming the driving voltage signal resembles a step function, the minimum time, Tmin, required for the length of the actuator to transition between its initial and final values is approximately 1/3 the period of resonant frequency. If there is no load applied to the piezoelectric stack, its resonant frequency is ƒo and its minimum response time is:

After reaching this nominal extension, there will follow a damped oscillation in the length of the actuator around this position. Controls can be implemented to mitigate this oscillation, but doing so may slow the response of the actuator.

Estimating Device Lifetime for DC Drive Voltage Conditions
The lifetime of a piezoelectric device is a function of the operating temperature, applied voltage, and relative humidity conditions. Lifetimes are reduced as a consequence of humidity-driven electrolytic reactions, which occur at the electrodes of the piezoelectric devices when a DC voltage is applied. These reactions both generate hydrogen and result in metal dendrites growing from the cathode towards the anode. The hydrogen liberated by the electrolytic reaction chemically reacts with and degrades the piezoelectric material. Dendrites that grow to electrically connect the cathode and anode result in increasing levels of leakage current. Failed piezoelectric devices are defined as those that exhibit leakage current levels above an established threshold.

A ceramic moisture-barrier layer that insulates Thorlabs' piezoelectric devices on four sides is effective in minimizing the effects of humidity on device lifetime. As there is interest in estimating the lifetime of piezoelectric devices, Thorlabs conducted environmental testing on our ceramic-insulated, low-voltage, piezoelectric actuators. The resulting data were used to create a simple model that estimates the mean time to failure (MTTF), in hours, when the operating conditions of humidity, temperature, and applied voltage are known. The estimated MTTF is calculated by multiplying together three factors that correspond, respectively, to the operational temperature, relative humidity, and fractional voltage of the device. The fractional voltage is calculated by dividing the operational voltage by the maximum specified drive voltage for the device. The factors for each parameter can be read from the following plots, or they may be calculated by downloading the plotted data values and interpolating as appropriate.

The data used to generate these temperature, voltage, and humidity factor plots resulted from the analysis of measurements obtained from testing devices under six different operational conditions. Different dedicated sets of ten devices were tested under each condition, with each condition representing a different combination of operational voltage, device temperature, and relative humidity. After devices exhibit leakage current levels above a threshold of 100 nA, they are registered as having failed. The individual contributions of temperature, humidity, and voltage to the lifetime are determined by assuming:

where A1, A2, A3, b1, b2, and c are constants determined through analysis of the measurement data, V is the DC operational voltage, T is the device temperature, and H is the relative humidity. Because the MTTF has a different mathematical relationship with each factor, the dependence of the MTTF on each factor alone may be determined. These are the data plotted above. The regions of the above curves marked by the blue shading are derived from experimental data. The dotted regions of the curves are extrapolated.

Lifetime testing of these devices continues, and additional data will be published here as they become available. To assist in temperature control, please see our selection of thermoelectric coolers. Temperature and humidity can be monitored using our USB Temperature and Humidity Logger.

150 V Piezoelectric Stacks with Through Hole