Since tablet coatings can affect delayed-release and other control properties of pharmaceutical medications, a full understanding of coating structure is critical to the pharmaceutical industry. Traditionally, X-ray computed tomography, terahertz (THz) pulse imaging, nuclear magnetic resonance imaging, Raman Spectroscopy, and Near Infrared (NIR) spectroscopy have been used to characterize tablet coatings. Each has relative advantages and disadvantages; for example, X-Ray imaging offers high spatial resolution but is insensitive to density variations within a tablet, while THz pulse imaging has lower resolution but is more sensitive to density and chemical variations. Over the past few years, Optical Coherence Tomography has emerged as a promising tool for investigating tablet coating structures.

Compared to other methods, OCT is a nondestructive modality that can offer fast imaging speed (greater than 25 frames per second), high spatial resolution (less than 5 μm), and ease of implementation, which makes it an attractive technology for inline quality control during manufacturing. In addition, OCT is complementary to the widely used THz technique; the absorption and scattering cross sections are different in the NIR and the THz wavelengths and thus provide analogous data.

To investigate the feasibility of OCT for tablet characterization, Mauritz et al. recently made a series of tablet coating measurements using a Thorlabs spectral radar OCT system (central wavelength: 930 nm). This system provided a transverse resolution of 9 μm, a theoretical axial resolution of less than 6.5 μm, a line rate of 5 kHz, and an imaging rate of 4 frames per second. 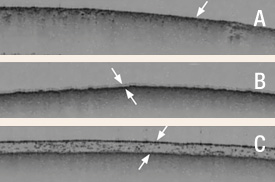 OCT utilizes the refractive index (RI) changes between different layers of coated tablets to identify structural characteristics. Figure 1 compares the OCT images obtained from three pharmaceutical tablets, each with a different coating. Figure 1A shows an uncoated tablet. The dark line indicates the large RI change that occurs at the air/tablet interface. The curves and roughness present in the surface are clearly visible. Figure 1B shows a tablet with a single cosmetic coating. A small RI change represents the air/coating interface, while a drastic RI change, indicated by the dark line, represents the boundary with the tablet core. These boundaries are designated by the arrows in the figure. Within the coating region, variations indicate that the coating layer is inhomogeneous. Figure 1C shows a tablet with both an enteric coating, which causes the drug to be released in the small intestine, and a cosmetic coating (inner layer). In all cases, the depth profile fades exponentially within the tablet core due to absorption.

From the images shown, tablet coatings with varying chemical composition and density can be clearly identified due to their different refraction and absorption properties. For example, the black dots visible within the coating layers indicate inhomogeneity; these density variations have been shown to influence the dissolution process.

Compared to other techniques used in this field, the cost effectiveness, small footprint, and fast imaging capability of OCT make it a promising choice for monitoring and studying pharmaceutical tablet coatings. The rapid, nondestructive nature of OCT could also allow for better tablet inspection during and after manufacturing and increase understanding of factors associated with solid dose dissolution processes.